Your Guide to Adirondack Snowshoe Adventures

Float over bottomless drifts as you explore frozen wilderness.

Native Americans made the first snowshoe tracks in the Adirondacks. Made of hardwood timber arced into oblong teardrops and rawhide laces for platforms and bindings, the design spread weight evenly across the snow’s surface, allowing them to float over snow rather than punch thigh-deep postholes with each step.

Much later, French Canadian fur trappers adopted snowshoes, which they called “raquettes” due to the racket-like shape. By the late 1800s, snowshoes were essential gear for foresters, guides, and any winter adventurer in the Adirondacks, as well as the inspiration for naming local lakes, towns, and rivers (that’s right – Raquette Lake is named after snowshoes!).

Modern snowshoes fashioned from lightweight metal and durable plastic make outdoor recreation accessible year-round. “The simplicity factor in design and use makes it a fun, easy sport to get out and enjoy,” says Carl Heilman, a renowned photographer with more than 40 years of snowshoe experience.

After you’ve equipped yourself with gear, use this guide to find your own Adirondack snowshoe adventure. 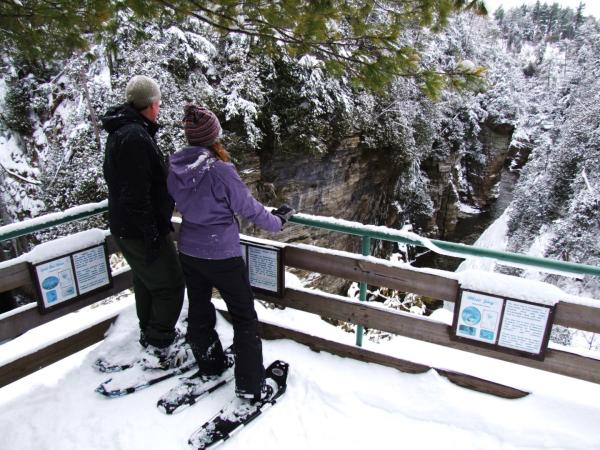 Thanks to Champlain Area Trails, a non-profit organization that creates hiking and skiing trails that link New York’s Champlain Valley Communities, there are seemingly endless trails throughout the region that are perfect for snowshoeing. CATS has created over 56 trails, in addition to protecting hundreds of acres of land. Check out these and other trails while the snow is deep! 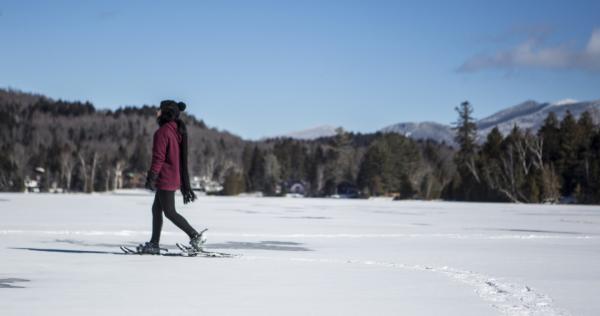 Ready for a winter summit? Start from Lake Placid’s High Peaks Information Center, where Adirondack Mountain Club staffers rent snowshoes. Gauge your fitness and winter skills with a trek up 2,876-foot Mt. Jo (2.6 miles roundtrip), and scope 4,000-footers from the top. “When you hit the summit, always know which way you came up—it’s easy for tracks to get filled in,” says Connor. “Start small and know when to turn around.” If you’re looking to bag a peak outside the High Peaks, turn your sights to Debar Mountain outside Malone. This mid-level hike is a great option for somewhat experienced snowshoe hikers looking to experience a different view.

Off The Beaten Track 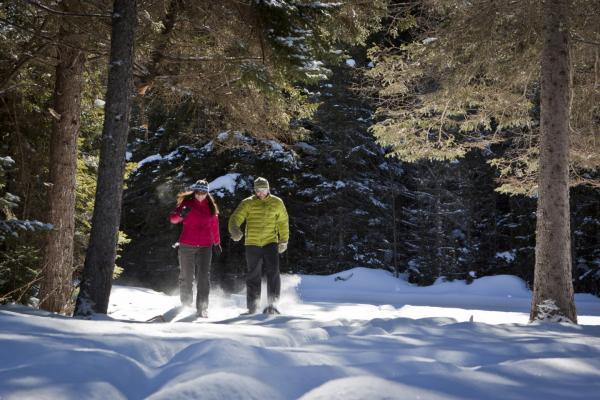 For a true wilderness experience, head for the most sparsely populated zone of the Adirondacks. Loosen up the legs at Newcomb’s Adirondack Interpretive Center, where marked trails meander for 3.6 miles along Rich Lake’s shoreline and through surrounding forest. Then tackle the steep approach to 3,760-foot Blue Mountain, a four-mile return trip. Pack crampons to navigate an exposed, icy summit crowned by a fire tower.

Mingle with Saranac Lake locals at outdoor hubs complete with trail signs and hot cocoa. Visit Mount Pisgah, where a 3.5-kilometer trail lets you gaze at the frozen Saranac River. Head to the Dewey Mountain Recreation Center, pop into the lodge to rent snowshoes, then trek four kilometers uphill for views across the Saranac Chain of Lakes. Ready for a challenge? Drive 20 minutes north to the 40-kilometer trail network at Paul Smith’s College Visitor Interpretive Center or tackle the new Adirondack Snowshoe Fest! 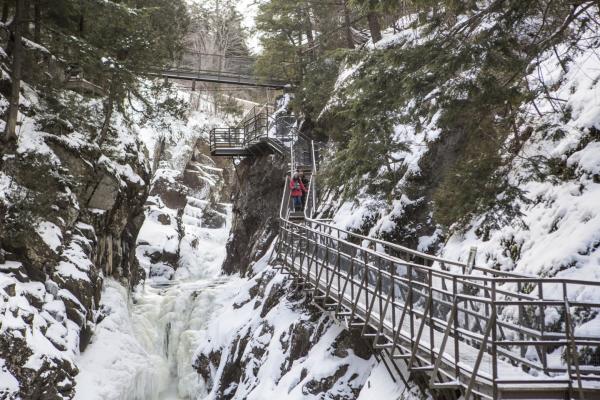 Free snowshoes, plus a weather-proof backup plan, are available at The Wild Center in Tupper Lake, a natural history museum with a 115-acre campus. Snowshoes rentals are included with admission in the winter and there are a variety of trails to choose from. Beginners can get acclimated with a short hike over rolling terrain that leads to Raquette River views (1 mile round-trip). Warm up at the indoor café, then explore art and science exhibits or try hands-on kids’ activities. High Falls Gorge in Wilmington offers spectacular views of frozen waterfalls and 22 acres of trails that are extremely accessible to beginner snowshoers. Rent gear onsite and hit the trails – you may even stumble across a warm fire and delicious s'mores along the way!