It’s 9 a.m. at the base of Poke-O-Moonshine mountain, and it’s already well above 80 degrees. The clouds hang low, obscuring the surrounding peaks and creating a hazy, impenetrable barrier against the sunlight. Other than the occasional “chirrrrrrrrr” of a red squirrel, things are quiet and still.

The quiet is broken by the sound of footsteps descending the trail, and soon a woman emerges from the forest. Her hair carries a week's worth of sweat, her shirt clings to her shoulders, and her pants and arms are streaked with dirt. This is not a day hiker. Her name is Char Staats, she is the leader of an all-woman team from the Adirondack Mountain Club's Professional Trail Crew, and her look is the product of several days spent working in the backcountry. 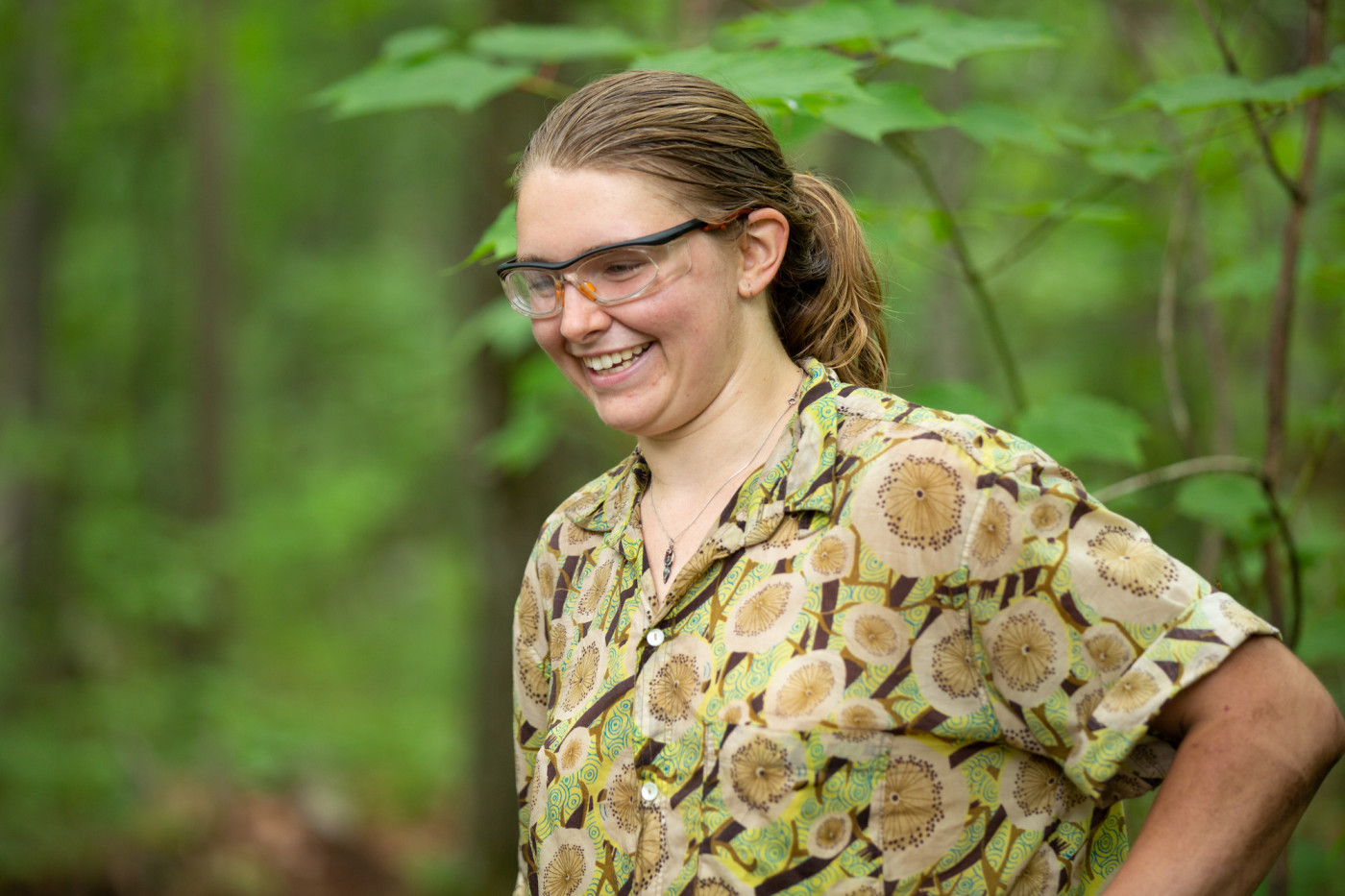 Char approaches with a smile, and explains why she’s coming down the mountain — she's fetching a new bit for the hammer drill.

"We’ve been doing a lot of rock splitting up here so we can get some nice rock steps to the dimensions that we want," Char said. “This is actually the sixth bit we’ve broken on this project."

For the love of dirt

If you’ve hiked in the Adirondacks, you’ve probably seen the work of an ADK Professional Trail Crew. As soon as the snow recedes, the young men and women of the crew are out there repairing eroded paths, building stone staircases, sawing logs to make bridges, and digging, breaking, and hauling impossibly heavy materials. They work rain or shine, sometimes in high elevations or miles deep in the backcountry, and they love every grueling second of it.

The trail crew is an enduring legacy in the Adirondacks, but three years ago it did something different — a two-week long project with a team consisting exclusively of women. This year, the project was to finish a trail reroute on Poke-O-Moonshine, beginning at the entrance to the old state campground. It replaces an old path that started further into that same campground. 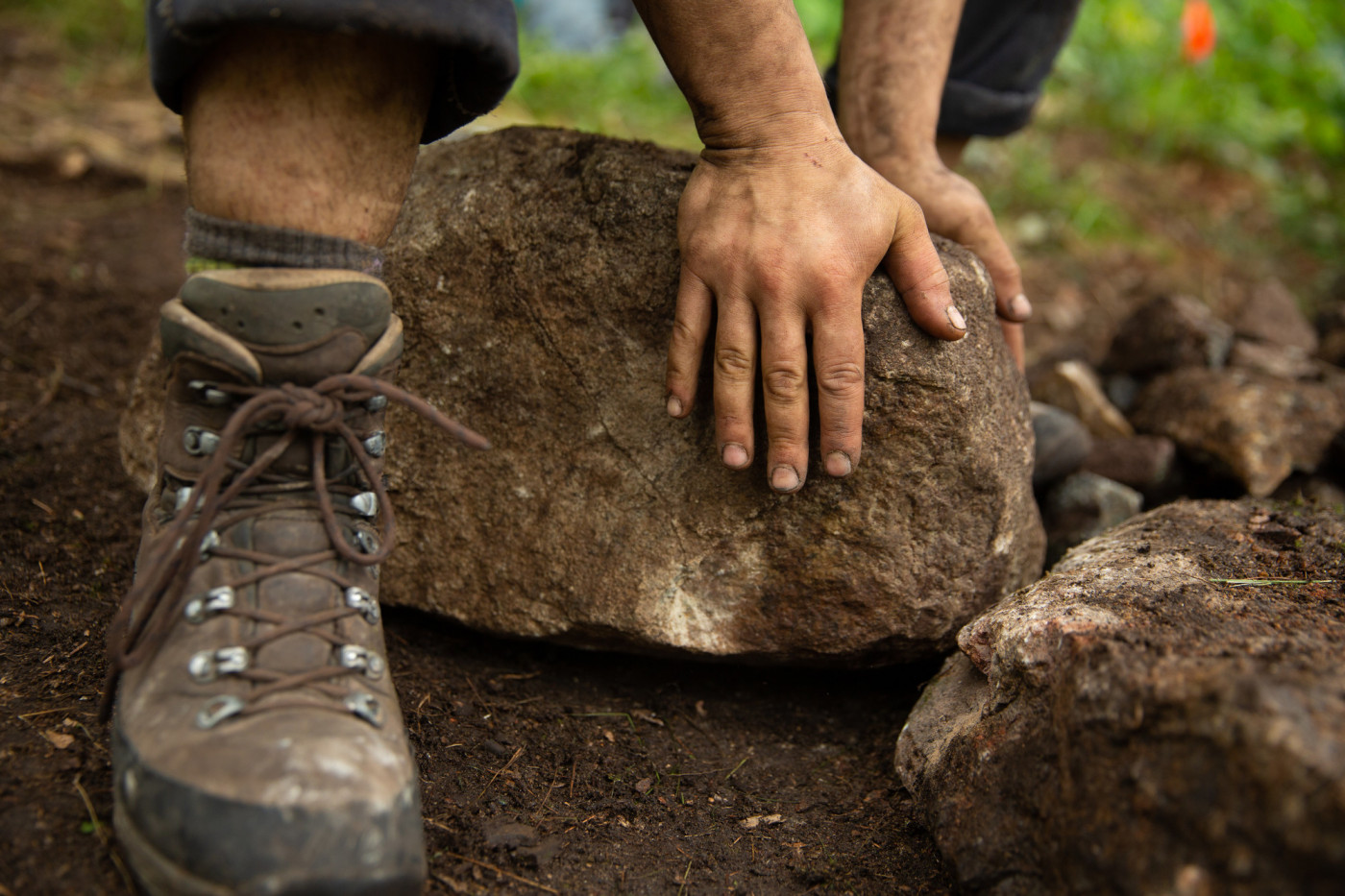 Unlike the route it replaced, the new trail zigzags up the lower slopes as it skirts the mountain’s impressive cliff band. Steep, washed-out sections are no more — now there are stone steps everywhere, which will keep the popular trail from eroding. A lot of those features were put in place by volunteer groups prior to the arrival of Char’s crew.

At the top of the lower cliff, the path diverges to the left, and instead of heading up the valley like the old trail it continues on, sweeping wide of the summit along a far more scenic, and moderate, route. Along the way there is a lot stonework and an impressive log ladder, at the base of which is a boulder that Char’s team had to split before the ladder could be built.

It's demanding, skilled work, and there’s pride in Char’s voice as she explains what she does. The reason for her pride is twofold: it takes a certain amount of fortitude to be on the Adirondack Trail Crew, and by doing so Char is following in her mother’s boot prints.

“She was on a trail crew in the late ’80s,” Char said. “Last week, she brought us water and cookies. It was really cool.” 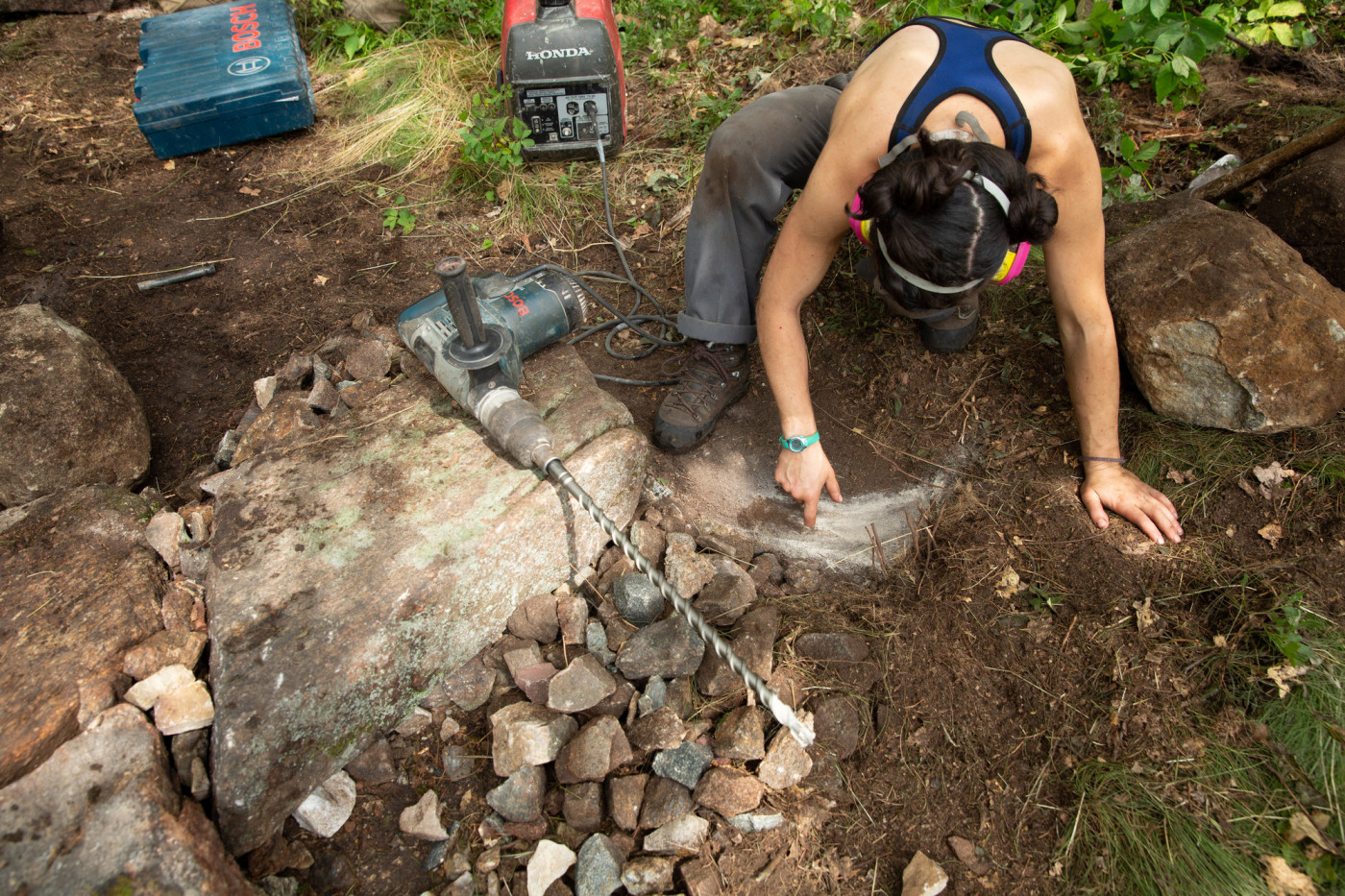 This is Char’s third season on the professional trail crew. Before that she volunteered, a stepping stone to going pro. Among her favorite jobs are the trail through Avalanche Pass, the ladders on Mount Colden, and maintenance work on a bridge along the Northville-Lake Placed trail that her mother helped build 25 years ago.

“My mom is a strong, incredible woman,” Char said. “She taught me not to shy away from hard physical labor, and I hope I can do the same for women who see me working on these trails.”

If you’ve ever encountered an Adirondack Trail Crew at work, you know the drill — you hear them before you see them. Even if it isn’t the sound of grunts or hammers and saws, it’s their voices. Trail crew members are, by nature, a jovial and boisterous bunch, content with their aching muscles and unwashed appearance.

Things on Poke-O-Moonshine were no different. High up on the mountain two of the six crew members, Crandy and Nips, were working a large hammer drill that was powered by a generator — yes, one of them carried that generator uphill for over a mile —to finish a stone walkway. Just beyond that there was the sound of rocks being smashed in a mini quarry just off the trail. Nami and Kirby hauled rocks out of the woods and hand delivered them to Two-Scent, who was methodically pulverizing them with a sledge hammer. Swing, crack, exhale, repeat.

These women are badass, and they know it.

“You challenge yourself every single day, and you see progress every single day” Two-Scent said as she admired her biceps. “I am a completely different person than I was at the beginning of the season. That progression is amazing to see happen.”

Part of the camaraderie between the trail crew members is exemplified in their nicknames (no, someone didn’t name their baby Nips). It can take some time to acquire a trail name, but once it’s been bestowed that’s what you’re called. The crews have other traditions, too. Various calls are used to signal to each other, and first-timers like Kirby get a single-bladed axe. After a year, a double-bladed axe is awarded.

It’s all about the forest

Fun and mud aside, trail building is serious work. All along the new trail there are little flags placed by a forester. Those are basically the backcountry equivalent of sticky notes — each one is something that Char and her team need to revisit and tweak, things like “erase chisel marks” or “repair loose step.” 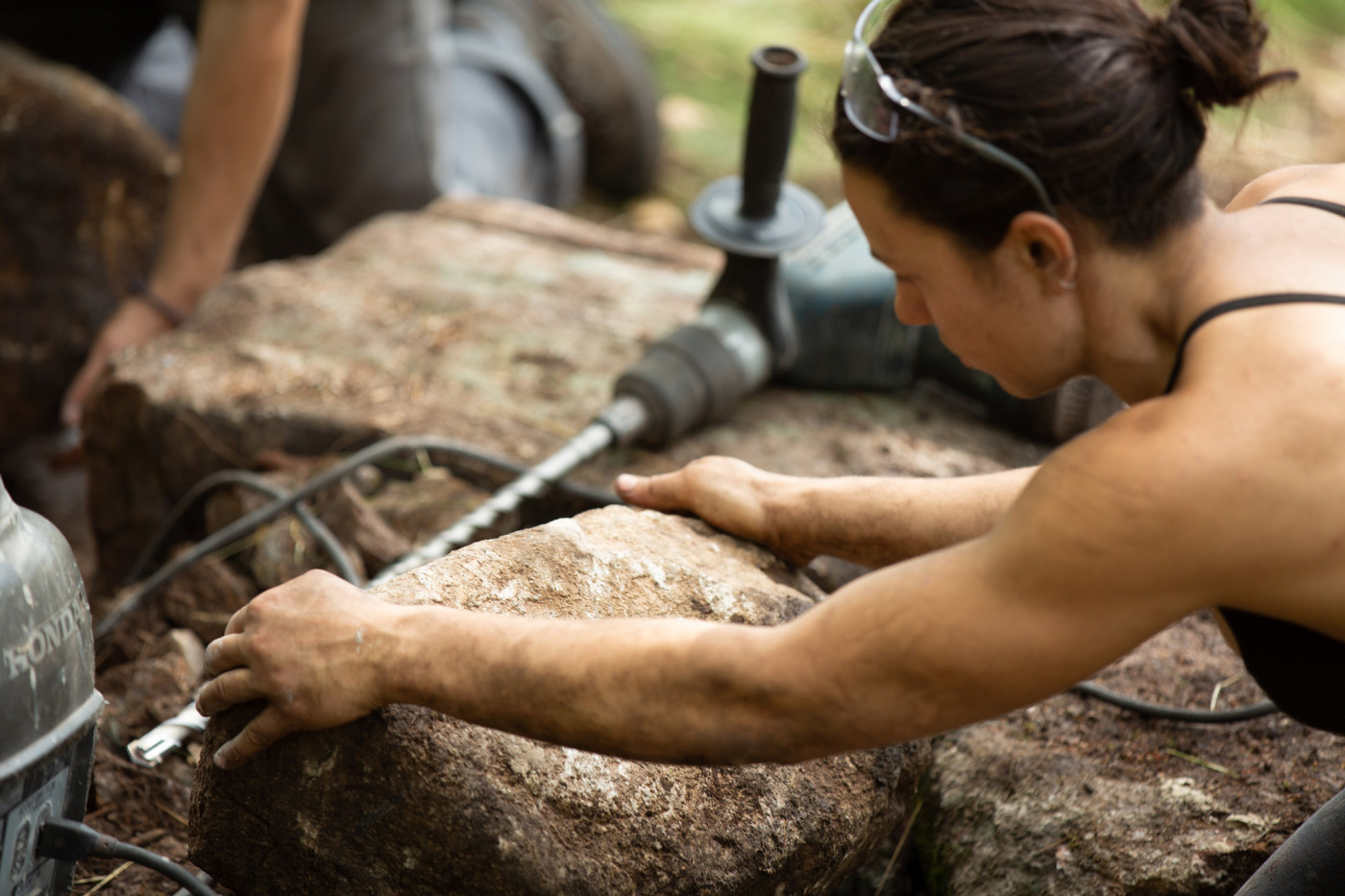 The purpose of those notes isn’t just to benefit future hikers. All paths in the Adirondacks must be constructed in a way that maintains the integrity of the surrounding forest. Water drainage, which causes erosion and the widening of the trail, is a major concern. That’s where all those bridges, ladders, and staircases come in — they’re not there to make the hike easier, they’re there to keep people on the path and to make the route as low-impact as possible.

“Parts that are most sensitive, like wet, mucky, mossy areas where people don’t want to step through the mud, those get impacted the most because they are trying to step around it,” Char said. “In reality, everyone should walk right through the mud or on the structure that’s been put there. Hiking boots are able to take on the mud and water.”

The crew’s finished products need to be sturdy to withstand thousands of hikers, plus the relentless wear and tear of Adirondack weather. There’s a science behind all of that log slinging and rock smashing, and there are a lot of rewards, too.

“You get high up on a mountain, or in a place like Avalanche Pass, and in the morning you get the sunlight shining through the trees and it’s quiet except for the birds singing, or sometimes it’s rain storms and thunder,” Char said. “It’s so beautiful. It’s my favorite way to wake up.” 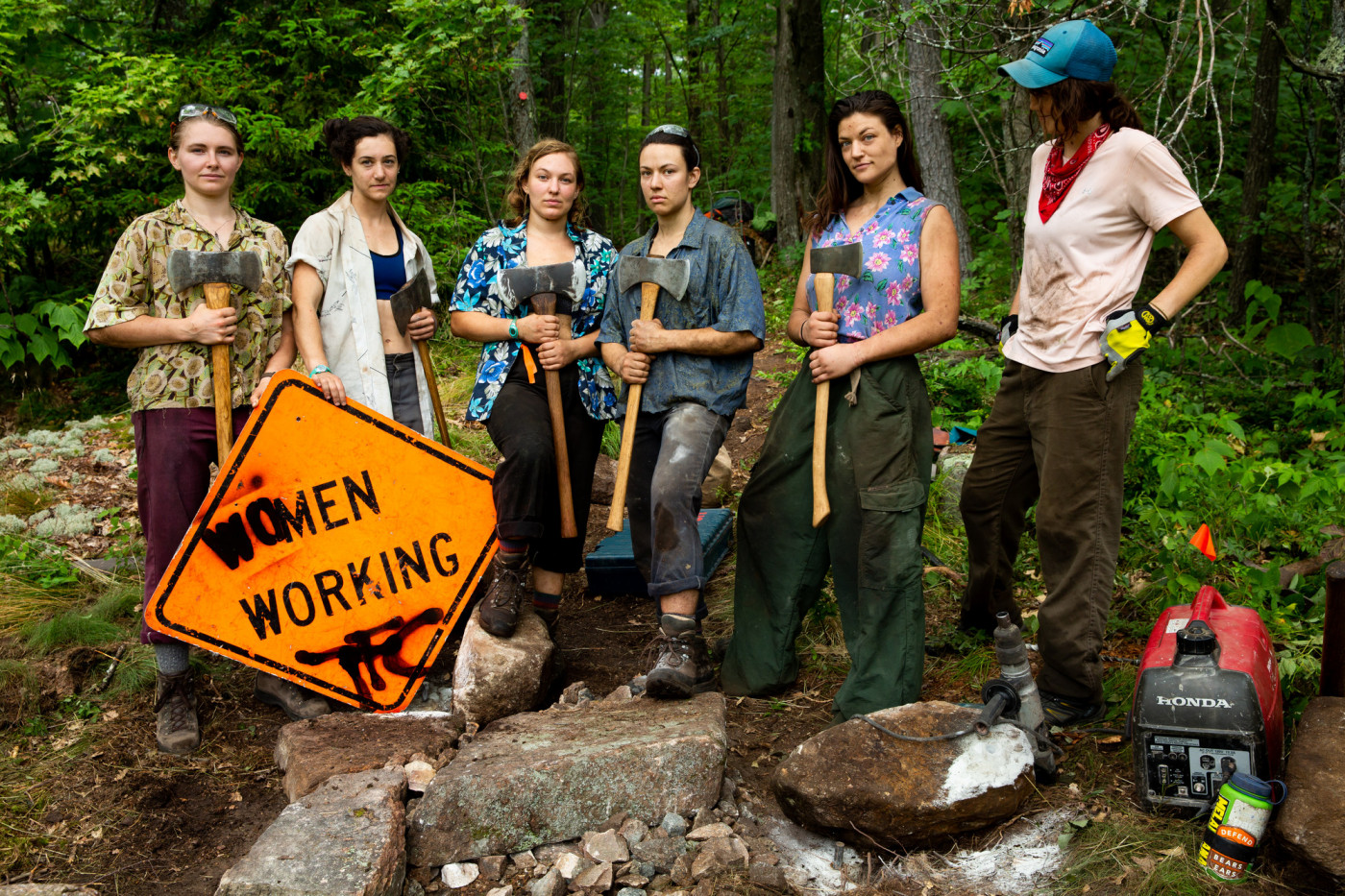